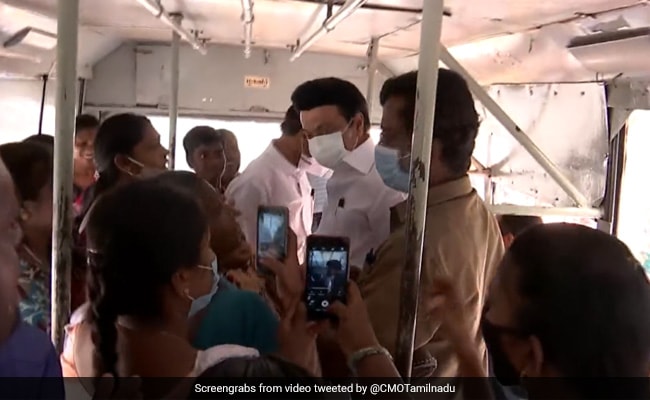 Passengers of a city bus – which ferries women for free – in Chennai were in for surprise on Saturday when Tamil Nadu Chief Minister MK Stalin hopped onto a public bus and asked the women about the free travel plan for them.

MK Stalin boarded the bus at Kannagi Nagar on his way to inspect a few vaccination centres organised as part of the sixth mega inoculation drive.

“The Chief Minister inspected the bus and spoke to women about the free travel scheme the DMK government announced a few months ago soon after coming to power,” a statement from the state government said.

A video released by the state government shows the Chief Minister’s convoy stopping and MK Stalin crossing the road and boarding the bus on the other side.

Surprised passengers were seen greeting him with folded hands and a woman even clicked a selfie with the Chief Minister. He was also seen speaking to a few of them briefly.

Ahead of the festive season the state government today permitted 100% occupancy in buses except those travelling to neighbouring Kerala. The state government also further extended the Covid-19 lockdown restrictions on Saturday till November 15 but allowed some relaxation. The ban on festivals and political events will, however, continue.