T20 World Cup: Ireland registered a crushing seven wicket win over Netherlands with Curtis Campher bowling the spell of his life in the qualifier Group A match. 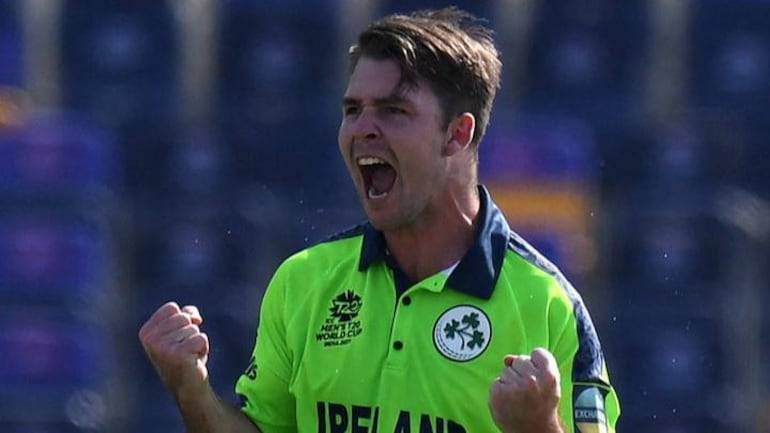 Ireland rode on pacer Curtis Campher’s record bowling spell to register a clinical seven-wicket win over the Netherlands in the Group A match and open their account in the ICC Men’s T20 World Cup 2021 qualifiers in Abu Dhabi on Monday.

Curtis Campher took 4 wickets in 4 balls while Mark Adair returned with 3 wickets as Ireland bowled out the Netherlands for a paltry 106. Campher joined Lasith Malinga and Rashid Khan to become only the third man to take four wickets in four balls in T20Is. Varying his length through the over and angling the ball in, he sent back Colin Ackermann, Ryan ten Doeschate, and Scott Edwards to take a hat-trick, before adding Roelof van der Merwe to his victims.

Ireland vs Netherlands, Round 1 Group A: T20 World Cup Highlights

After having restricted the opposition to a paltry total, the Ireland batters made sure to gun down the 107-run target in just 15.1 overs with Gareth Delany playing an aggressive inning and Stirling playing a rather sedate one. Kevin O’Brien (9 off 10) and Andy Balbirnie (8 off 6) both fell in the powerplay, but a destructive partnership between veteran opening batter Stirling (30*) and young all-rounder Delany broke the back of the target.

A comprehensive victory for Ireland

“I knew there was a glove on it, I heard a sound and thought it had to be the glove (On Ackermann’s review). I thought it was definitely hitting the leg stump and I said to Balb to please go upstairs (On Edwards’ review). To be honest, I didn’t feel the best out there coming back from injury,” Curtis Campher said in the post-match presentation ceremony.

“I tried to bang the wicket down and keep hitting the hard length. The first over didn’t go to plan but the skipper had faith in me and it worked out well. The bowling department has been working hard on the yorkers and change-ups. Any day I don’t bat is a good day, this one to just knock off 6-10 runs was very nice,” Campher added.