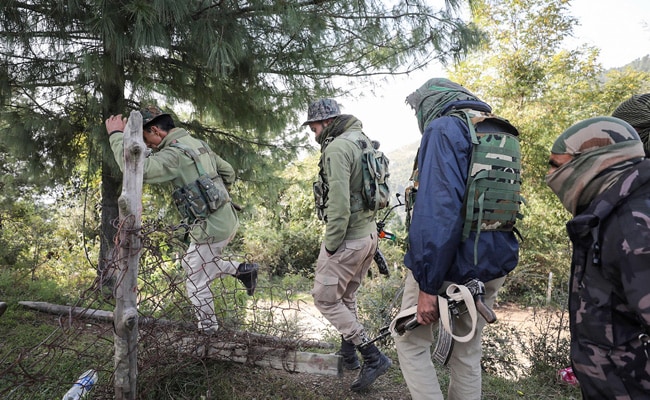 Army is engaged in one of the longest anti- terrorist operation in Poonch for last 14 days. (File photo)

Two policemen and a soldier have been injured in the gunbattle between security forces and terrorists in Jammu and Kashmir’s Poonch district.

A jailed terrorist from Pakistan-occupied Kashmir, who was remanded in police custody was also injured in the firing, officials said, adding that the injured terrorist could not be evacuated due to heavy firing.

The fresh gunbattle in Poonch – where the anti-terror operation entered its 14th day today – started after terrorists opened fire on a joint search party of the Army and police inside a forest in Poonch district this morning, officials said.

According to police, they were approaching a terrorist hideout in Bhata Durian area when they were fired upon by the terrorists hiding there. Police said the terrorist, Zia Mustafa, couldn’t be extracted due to heavy firing.

Zia, was lodged in Kot Balwal jail for several years and taken on 10 days remand by police on Friday.

A resident of Pakistan-occupied Kashmir, Zia had infiltrated 15 years ago and was lodged at Jammu’s Kot Balwal jail. There were reports that he may have been in touch with terrorists from jail.

Zia was taken to Mendhar in Poonch apparently to identify the route terrorists involved in Poonch encounter may have used.

The Army is engaged in one of the longest and toughest anti-terrorist operation in the area for the last 14 days.

Nine soldiers including two officers have died in the line of duty so far.

The anti-terror operation in the forest areas in the twin border districts began on October 11 when terrorists ambushed a search party killing five soldiers including a Junior Commissioned Officer (JCO) in Poonch before another gunfight in nearby Thanamandi on the same day.

On October 14, the terrorists struck again and killed four soldiers including a JCO in Nar Khas forest in Mendhar as the security forces combed the area to neutralise hiding terrorists.

Drones and helicopters were pressed into service to assist the marching troops, which included para-commandos, in the jungle area at a distance of over 20  km from the Line of Control (LoC), the officials said.

Police have detained 10 persons, including two women for questioning after it came to light that they allegedly provided logistic support including food and shelter to the terrorists, the officials said.

With inputs from PTI