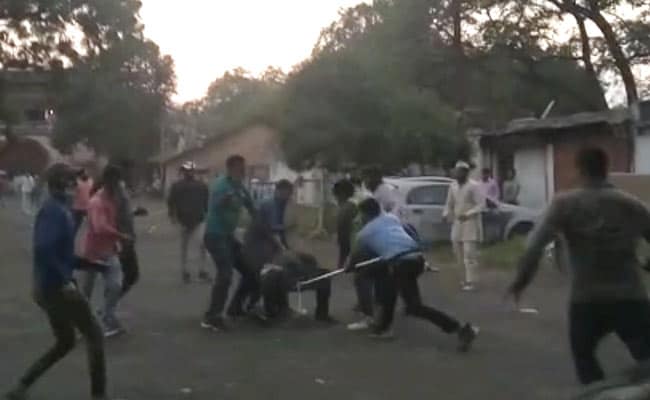 Filmmaker Prakash Jha was roughed up, his face smeared with ink on Sunday when a group of Bajrang Dal members went on a rampage on the set of his web series being shot in Bhopal, the police said.

Videos shot by witnesses on cellphones showed Bajrang Dal members chasing down crew members, managing to catch at least one of them and beating him mercilessly with a metal light stand.

Activists of the Bajrang Dal allegedly went on the rampage during the ongoing shooting of Prakash Jha directed web series Ashram-3 in Bhopal, ransacking property, including vehicles and also assaulting crew members @ndtv@ndtvindiapic.twitter.com/VbQvGtxqOy

Members of the right-wing group said Prakash Jha’s web series ‘Ashram’ starring Bobby Deol was an assault on Hinduism and they will not allow its filming till the title was changed.

Mr Jha, who has not filed a complaint in the matter yet, has assured that he will change the name of the series, a Bajrang Dal leader said.

“They made Ashram 1, Ashram 2 and were shooting Ashram 3 here. Prakash Jha showed in Ashram that the guru was abusing women. Does he have the guts to make such a film on a church or madrasa? Who does he think he is?” Bajrang Dal leader Sushil Sudeley said.

“Bajrang Dal challenges him, we won’t let him make this film. So far we have just blackened Prakash Jha’s face. We are looking for Bobby Deol. He should learn something from his brother (Sunny Deol). He made such patriotic movies,” he added.

The police have said that even though no one from Mr Jha’s team has pressed charges, those involved will be identified and arrested.

“Action will be taken against those who disrupted the shooting and vandalised property today itself. They will be arrested,” senior police officer Irshad Wali said.

“Anti-social elements ransacked vehicles created trouble. Crew members of Ashram will be given fill security and it will be ensured this does not happen again,” he added.

In 2017, another right-wing group Karni Sena had attacked the sets of the Deepika Padukone starrer Padmaavat, assaulting director Sanjay Leela Bhansali and other crew members and forcing the movie to modify scenes and change its name from Padmaavati.

Earlier this year, Amazon had to issue an apology and make changes to its Saif Ali Khan starrer web series Tandav after it faced objections from some Hindu groups and the producers were threatened with arrest by the Uttar Pradesh government.