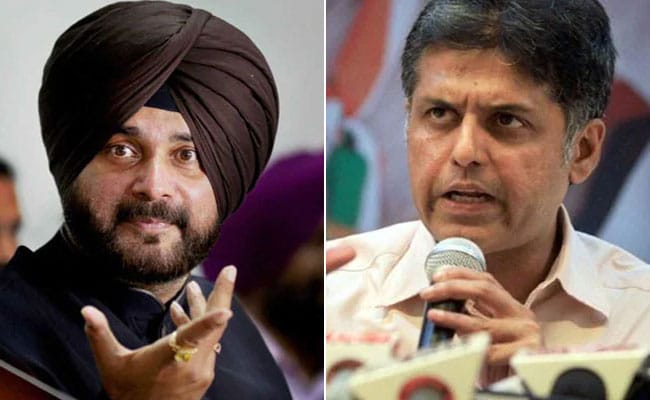 Manish Tewari said there was “chaos and anarchy” in Punjab Congress.

Twitter was abuzz on Sunday morning with Congress leaders publicly criticising their own party and the state government in Punjab. Senior party leader Manish Tewari took to the microblogging site alleging that there’s “chaos and anarchy” in Punjab Congress. Mr Tewari, a G 23 member, also called the Mallikarjun Kharge committee a “serious error of judgment” and alleged that “those who complained loudest of transgressions and aberrations were unfortunately & continue to be worst offenders themselves.”

The state party chief Navjot Singh Sidhu also posted a series of tweets this morning hinting that the Charanjit Singh Channi government was not focusing on “real issues”.

Referring to a recent interview of the party’s general secretary in-charge of Punjab Harish Rawat in the business newspaper The Financial Express, Mr Tewari hit out strongly at the state unit of the party. “In my 40 years plus in the Congress, I have never seen such chaos and anarchy as what is playing out in Punjab Congress today,” he said in a series of tweets. Taking a dig at Mr Sidhu, he added that there was “repeated open defiance” of the central committee of the party by a regional president, and colleagues were squabbling publicly with each other “like children”.

Since you referred to me in this interview????????I also have great regard & respect for you going back to days when I headed @nsui & you @CongressSevadal.
However in my 40 years plus in @INCIndia I have never seen such chaos 1/2https://t.co/GcE6Mw0niK

Responding to a question on Mr Tewari’s support of former Punjab CM Amarinder Singh, Mr Rawat had said that he should understand the ground situation in Punjab. “It is not just a matter of security, but also of continuance of a government. When the MLAs are revolting, the stability of the government is threatened… The honourable CM (Singh) had seldom called a CLP meeting or addressed these issues with his MLAs,” he said, referring to the former chief minister’s alleged inaction on issues promised by the party during the 2017 state election campaign like the Bargari (Guru Granth Sahib sacrilege case) and the drugs issue, or the power purchase agreements.

“Where is progress on the issues that agitated these MLA’s & other eminences…Has there been any movement forward,” Mr Tewari asked.

Meanwhile, Mr Sidhu trained his guns at the state government and said that Punjab must come back to its “real issues that concern every Punjabi and our future generations”. He said that a “financial emergency” was staring at the state. “I will stick to the real issues and not let them take a backseat,” he said in a tweet.

Mr Sidhu said that there was a clear choice between “irreparable damage” and the “last chance for damage control”. Hinting at inaction on corruption in the state, he said, “Who will bring back state’s resources to the state’s coffers, instead of them going to private pockets? Who will lead the initiative for resurrection our great state to prosperity !!”?

Punjab must come back to its real issues that concern every punjabi and our future generations … How will we counter the financial emergency that stares upon us ? I will stick to the real issues and not let them take a backseat ! 1/3

In his usual literary flair, he concluded, “Let the mist clear, reality shine like the sun upon the roadmap for revival of Punjab, shunning those who protect the selfish vested interests and focus only on the path that will lead to Jittega Punjab, Jittegi Punjabiyat and Jittega Har Punjabi !!!”.