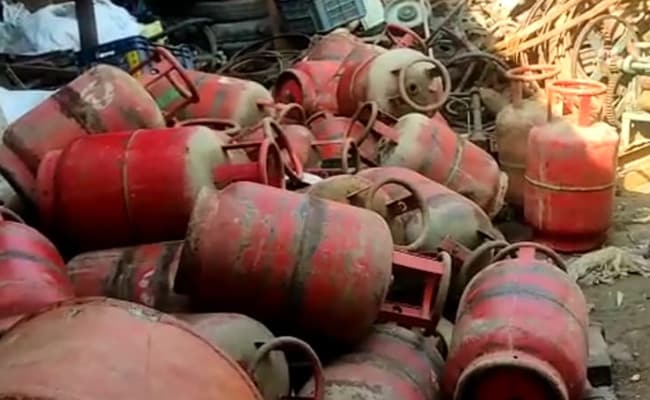 Out of 2.76 lakh families with LPG connections in Bhind, 1.33 lakh are beneficiaries of Ujjwala Yojana

Visuals of empty LPG cylinders at a scrapyard in Madhya Pradesh have prompted the Congress to target the centre’s Ujjwala scheme, with the Opposition party saying beneficiaries sold off the cylinders owing to the steep price of cooking gas.

Visuals of the cylinders at a scrapyard speak volumes about “uncontrolled inflation” under the Narendra Modi government, Mr Nath said. This is the situation just a month after Union Home Minister Amit Shah launched the second edition of the Ujjwala Yojana at a grand event in Jabalpur, he added.

Several beneficiaries of the cooking gas scheme NDTV spoke to said they had stopped refilling the cylinders owing to steep prices.

“We are daily wage labourers. I have four children. We are short of money on days I don’t get work. How can we get LPG cylinders refilled? We stopped getting them refilled after prices crossed the Rs 600 mark,” said a labourer, requesting not to be named.

A gas agency employee supplying refilled cylinders in Bhind district said, “Beneficiaries of the scheme book refilled cylinders, but when we go to their homes to deliver them, they don’t take them as they are unable to pay the high price.”

Avdhesh Pandey, supply officer for Bhind district, said he is not aware of cylinders being sold to scrap dealers and that the matter needs to be investigated. “Under the Ujjwala Yojana now, beneficiaries get the gas connection, stove and the first refill for free. We cannot provide further refilling for free,” he said.

As per official data, out of the 2.76 lakh families that have LPG gas connections in Bhind district, 1.33 lakh are beneficiaries of the Ujjwala Yojana. A 15 kg cylinder of cooking gas is currently available in Bhind district for Rs 983.50.

Diwali celebration in schools and colleges of Amroha