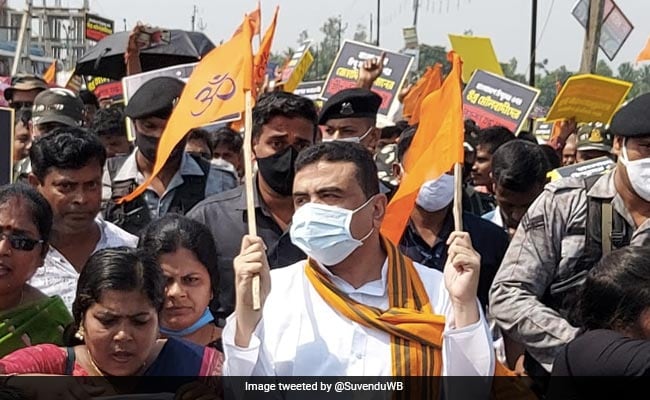 Suvendu Adhikari said he was at the rally to protest against the attacks on Hindus in Bangladesh.

Leader of Opposition in West Bengal Assembly, Suvendu Adhikari, on Saturday participated in a rally organised by a Hindu outfit in his Nandigram constituency in Purba Medinipur district against recent communal violence in neighbouring Bangladesh.

BJP’s Mr Adhikari, who walked over 2 km along with over 100 members of Hindu Jagran Manch, told reporters that he participated in the padayatra not as a political leader but as a “Sanatan” Hindu.

“I am here to register my protest against the unprovoked attacks on peace loving Sanatan Hindus in Bangladesh, the attacks on ISKCON, Ramakrishna Mission, temples, and Durga Puja pandals,” he added.

Last week, many Durga Puja pavilions and Hindu temples and homes across Bangladesh were attacked and vandalised, and several people killed in violence that erupted over alleged blasphemy at a marquee in Comilla.