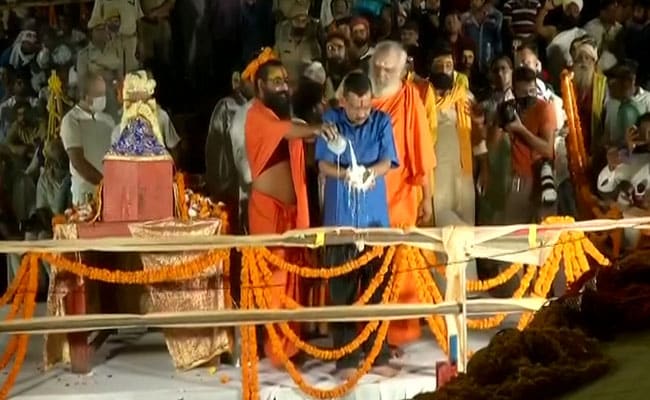 After performing aarti at the Saryu Ghat in Uttar Pradesh’s Ayodhya on Monday evening, Delhi Chief Minister Arvind Kejriwal started his speech with a chant of “Jai Shri Ram”. He said he considered himself lucky to “have had the fortune” of visiting the birthplace of Lord Ram and performing aarti of “Mother Saryu”. Mr Kejriwal said he believed that the country could be free of the Covid 19 pandemic with the deity’s blessings. He also invoked Lord Ram in his speech.

Uttar Pradesh goes to polls next year and Mr Kejriwal-led Aam Aadmi Party has announced that it will contest all 403 assembly seats in the state.

The Delhi CM tweeted a video showing him performing the aarti amid the glare of floodlights and cameras. He is seen touching the feet of priests who had organised the aarti and prayed with him. He also said that he would visit the Hanuman Garhi temple and offer prayers at the birthplace of “Ram Lalla” (Lord Ram) tomorrow morning.

Mr Kejriwal said that he prayed for the welfare of people in Delhi, Uttar Pradesh, and all of India. Stressing the need for “all 130 crore people” working together “without any discrimination”, he said India could become “number one” in the world. “We have a lot of problems like poverty and illiteracy in our country today,” he said.

“I want everyone to have the fortune of visiting Ayodhya as I did,” he concluded.

The Delhi CM’s visit to the holy city has been making headlines since yesterday. AAP member of parliament in Rajya Sabha Sanjay Singh had claimed that the BJP was planning to “attack” Mr Kejriwal during his visit.

In a video tweeted from his official account on the microblogging site, he said, “I want to clearly tell the CM Yogi Adityanath and the government of Uttar Pradesh to please desist from such antics. The BJP has developed a ‘demonic’ tendency to always target Arvind Kejriwal ji, the Aam Aadmi Party, obstructing his travels and work. Everyone has the right to darshan of Lord Ram”.

Diwali celebration in schools and colleges of Amroha