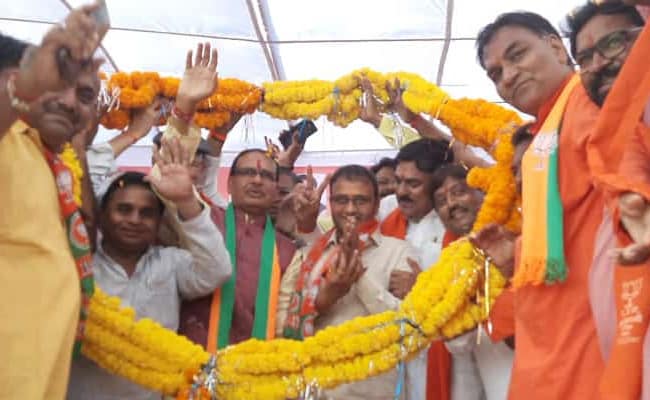 In another big jolt to Congress in Madhya Pradesh, one of the party’s MLAs switched over to the BJP just 6 days before a bypoll in the Lok Sabha constituency his assembly seat falls under. Sachin Birla, first-time Congress MLA from the Barwaha seat of Khargone district in MP joined the ruling BJP at Chief Minister Shivraj Singh Chouhan’s rally in Bedia village on Sunday. He is the 27th sitting Congress MLA to have joined the ruling party in the state since the Kamal Nath-led government fell following resignations by 22 of its MLAs in March 2020.

Khandwa-Burhanpur Lok Sabha constituency, along with three Assembly seats, goes to the polls on October 30.

Meanwhile, Union Civil Aviation minister Jyotiraditya Scindia has also hit the campaign trail for the bypolls. He will address rallies in the Khandwa-Burhanpur Lok Sabha constituency and the Jobat-ST assembly seat on Sunday and Monday.

Mr Birla claims that getting recognition from the present CM played a part in his decision. “After the Congress government fell in March 2020, I was surprised when the CM Shivraj Singh Chouhan not only recognised me and called me by name when we met at Vallabh Bhawan, but also heard me patiently and assured me to take up on priority the pending development works in 55 villages of Barwaha and Maheshwar assembly constituencies of Khargone district,” he said.

Chief Minister Shivraj Singh Chouhan said that Mr Birla was not heard during the Kamal Nath government and is being insulted now that he has moved to the BJP. “When Kamal Nath was in power in the state, Sachin Birla met him many times for irrigation of villages, development of Modern Mirchi Mandi in Bediya and construction of roads, but Nath never did anything to address concerns of the Barwaha constituency. Now Congress leaders, including Kamal Nath and Digvijaya Singh are defaming Birla as bikau (saleable), which amounts to disrespecting the entire soil and people of the Nimar region,” he said.